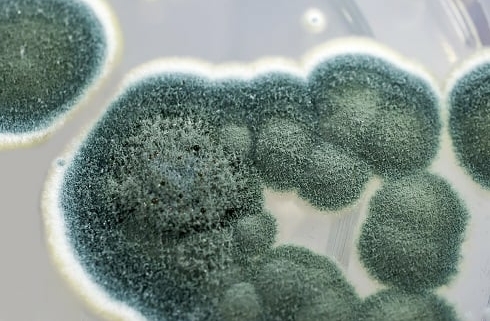 Mould is a organically occurring fungus and varies in its presentation. It can appear as a fuzz, stain or smudge commonly in shades of green black and white.

Mould spreads and grows from tiny particles called spores which attach to surfaces conducive to their survival and reproduce. To survive and produce more spores to spread, it must have access to both food and moisture.

Most surfaces in the home, particularly organic surfaces such as timber will have an abundance of food to sustain the growth of mould. It is with the introduction of moisture that areas of the home become more susceptible to the presence of mould.

Wet areas such as bathrooms are among the most common areas of the home that attract mould due to high levels of humidity and moisture. There are some great advice on condensation management in the home to ensure at risk areas have adequate ventilation.

Compromised weather seals and plumbing leaks, poorly maintained gutters all lead to moisture in building elements of the home and create an environment that promotes the growth of fungi. It is important to address moisture issues as they arise; engage appropriate qualified plumbers to rectify plumbing issues and ensure gutters are inspected and maintained appropriately

Will my building and pest inspection report on fungi?

During a Building and Pest Inspection, your inspector is specifically looking for fungi that damages timber. While mould is found on the wood surface only and does not decay the timber, it does indicate an environment conducive to timber decay.

Your home inspector will report on areas noted with heightened levels of moisture or poor ventilation. This commonly includes areas where mould is present.

What are the health affects?

The Victorian Department of Health advise that mould can cause nasal congestion, sneezing, coughing, wheezing and respiratory infections.

You should always seek medical advice from your GP if you have any concerns about the affects of mould on your health.

How to remove mould in the home?

The first and most important step is to remove the source of moisture. Moisture is the cause of the presence of mould, if this is not rectified at the source, the mould will regenerate.

The second step is to remove the mould. Fabric items such as clothing and soft toys must be washed in a hot cycle in the washing machine. Fabric items that cannot be washed in a washing machine such as couches or carpet should be professionally cleaned. Hard surfaces such as walls and ceilings can be cleaned with a vinegar solution (one part vinegar, three parts water) and microfibre cloth.

The last step is to prevent mould regrowth. Small areas of regrowth can be treated with the same vinegar solution used in the second step. If large areas of regrowth appear, it is recommended that professionals are consulted.

There is a great community guide provided by the Victorian Department of Health on Removing Mould at Home.

Want to join the discussion?
Feel free to contribute!

More than just an inspection GUARANTEED.

Thank you for choosing Venatic Building and Pest Inspections!

When you schedule your home inspection online, you’ll receive a confirmation email.

What does a pest inspection consist of?
Scroll to top